Niko D. Schroeder is one of eight Resident Composers selected for the 2022 Mizzou International Composers Festival from a total of 532 applicants from 49 countries. 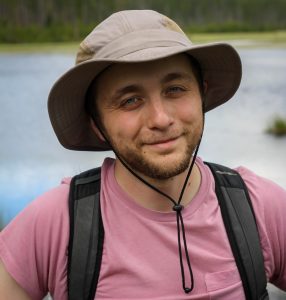 Niko D. Schroeder’s artistic practices reflect his Midwestern (U.S.) upbringing through rugged joy, community focus, and wry humor. His works draw on regional folklore and extra-musical elements to illustrate issues of environment, identity, and perception. For example, his composition, Bridge Sings, integrates field recordings of Michigan’s Mackinac Bridge, while another work,  moves, derives formal and musical material from historic chess matches. He is most himself when working with others, whether through co-composition or interdisciplinary collaboration.

Schroeder’s collaborative spirit is also reflected in his work as a bandleader, performer, arts administrator, and audio engineer. He has toured with rock, jazz, folk, and contemporary classical ensembles, including his polka outfit, the Bierkeller Boys Oompah Band. Cherished past projects include several ensembles dedicated to co-composition, like indie-pop band, The Lake Effects, and folk/classical quintet, Waiting for Niko.

Other performers of his music include Sō Percussion, Roomful of Teeth, Alarm Will Sound, the Sinta Quartet, Invoke string quartet, Khemia Ensemble, the Grand Valley New Music Ensemble, and members of Fifth House Ensemble. His work as a composer, performer, and engineer can be heard on Innova Recordings, Klavier, slashsound, and his own imprint—Wretched Toad Music.

Schroeder holds a Master of Music from the University of Missouri, Columbia, where he worked as an instructor and sound engineer. He was awarded the 2019 Sinquefield Prize, the university’s highest honor for a composer. He also holds a Bachelor of Arts from Grand Valley State University, where he won the Glenn A. Niemeyer Award — the highest distinction for student contributions to the university.

Schroeder lives in Missouri with his wife Julia and their two cats, Johnny Cash and June Carter. He is one of a few full-time artists to co-own a professional sports organization.

For the MICF, he has written a new work, Contrapunctus // Song (2022), which will have its world premiere July 30 at 7:30 pm at the Missouri Theater. The concert will feature Alarm Will Sound playing world premiere performances by all eight Resident Composers.

You can hear samples of Schroeder’s music on his website.