The Mizzou New Music Initiative is pleased to welcome Meredith Monk as one of the two distinguished guest composers for the 2022 Mizzou International Composers Festival (MICF). The Festival, scheduled Monday, July 25 through Saturday, July 30, 2022 on the campus of the University of Missouri in Columbia, will also welcome Guest Composer Angélica Negrón. 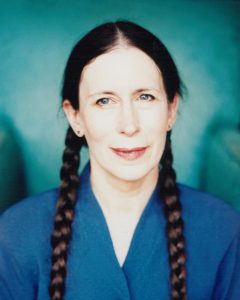 MICF will feature concerts of music by Monk, Negrón, and other contemporary composers performed in front of live audiences, along with in-person workshops, master classes, and other events. As a distinguished Guest Composer for the 2022 MICF, Monk will lead a workshop with the Resident Composers; make a public presentation on her music; and work with Alarm Will Sound and Mizzou Students, who will be playing her music at the Festival.

Monk will have two works performed at the 2022 MICF. On Thursday, July 28 at 7:30 pm at the Missouri Theater, MICF Ensemble-in-Residence Alarm Will Sound, alongside members of Meredith Monk & Vocal Ensemble, will perform Night (1996) and Anthem (2020). For a complete schedule of events, times, dates, and venues for the 2022 Mizzou International Composers Festival, please visit the MICF website.

Meredith Monk is a composer, singer, and creator of new opera and music-theater works. Recognized as one of the most unique and influential artists of our time, she is a pioneer in what is now called “extended vocal technique”. Her groundbreaking exploration of the voice as an instrument, as an eloquent language in and of itself, expands the boundaries of musical composition, creating landscapes of sound that unearth feelings, energies, and memories for which there are no words. Over the last six decades, Ms. Monk has been hailed as “a magician of the voice” and “one of America’s coolest composers.” Celebrated internationally, her work has been presented at major venues around the world. In conjunction with her 50th Season of creating and performing, she was appointed the 2014-15 Richard and Barbara Debs Composer’s Chair at Carnegie Hall. Recently Monk received three of the highest honors bestowed to a living artist in the United States: induction into the American Academy of Arts and Letters (2019), the 2017 Dorothy and Lillian Gish Prize, and a 2015 National Medal of Arts from President Barack Obama.

In 1965, Monk began her innovative exploration of the voice as a multifaceted instrument, composing mostly solo pieces for unaccompanied voice and voice and keyboard. In 1978, she formed Meredith Monk & Vocal Ensemble to further expand her musical textures and forms. In addition to numerous vocal, music-theater works and operas, Monk has created vital new repertoire for orchestra, chamber ensembles, and solo instruments, with commissions from Carnegie Hall, Michael Tilson Thomas/San Francisco Symphony and New World Symphony, Kronos Quartet, Saint Louis Symphony Orchestra and the Los Angeles Master Chorale, among others. Selected scores of her work are available through Boosey & Hawkes. Monk has made more than a dozen recordings, most of which are on the ECM New Series label, including the 2008 Grammy-nominated impermanence. Her music has also been featured in films by Terrence Malick, Jean-Luc Godard, David Byrne and the Coen Brothers.

Monk’s numerous honors include the prestigious MacArthur Fellowship, two Guggenheim Fellowships, a New Music USA Founders Award, an ASCAP Concert Music Award, and induction into the American Academy of Arts and Sciences. More recently Monk was named one of National Public Radio’s 50 Great Voices, the 2012 Composer of the Year by Musical America, and an Officer of the Order of Arts and Letters by the Republic of France. She also received the 2020 John Cage Award, 2012 Doris Duke Artist Award, 2011 Yoko Ono Lennon Courage Award for the Arts, and an inaugural USA Prudential Fellow award in 2006. Monk holds honorary Doctor of Arts degrees from ten esteemed colleges and universities including The Juilliard School and Boston Conservatory.

Currently Meredith Monk is developing Indra’s Net, the third part of a trilogy of music-theater works exploring our interdependent relationship with nature, following the highly acclaimed On Behalf of Nature (2013) and Cellular Songs (2018).

You can hear some samples of her music in the embedded videos below.