Caterina Di Cecca is one of eight Resident Composers selected for the 2022 Mizzou International Composers Festival from a total of 532 applicants from 49 countries. Ms. Di Cecca earned a Master of Music degree in piano at the Conservatorio di Santa Cecilia in Rome, then completed her Master of Music degree in composition there as well. Ms. Di Cecca also has Bachelor’s and Master’s degrees in Philosophy from the Università degli Studi di Roma Tre in Rome. She continued her musical studies through the Master Course in Composition of the Accademia Nazionale di Santa Cecilia. Ms. Di Cecca now teaches as a professor at the Conservatorio San Pietro a Majella in Naples. 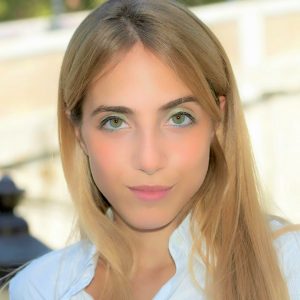 Ms. Di Cecca’s compositions have been performed throughout Europe as well as in Mexico, the Philippines, and the United States, by ensembles and orchestras such as Neue Vocalsolisten, Musiques Nouvelles, Ars Nova Ensemble, Riot Ensemble, and Orchestra della Toscana.

Ms. Di Cecca has been commissioned to compose works for Aldeburgh Festival in cooperation with Ulysses Network, Biennale Musica di Venezia, the Puccini Festival, as well as a number of other events and institutions.

For the MICF, Ms. Di Cecca has written a new work, Retour à Tipasa (2022), which will have its world premiere July 30 at 7:30 pm at the Missouri Theater. The concert will feature Alarm Will Sound playing world premiere performances by all eight Resident Composers.

“I am truly happy and honored that the Mizzou International Composers Festival 2022 has selected me to write a new piece for large ensemble to be played by Alarm Will Sound of New York and conducted by Alan Pierson,” commented Ms. Di Cecca on her website. “I can’t wait to work with this wonderful ensemble.”

You can hear samples of Caterina Di Cecca’s music on the Catalog page of her website, and on her YouTube page.