The inaugural Mizzou International Composers Festival took place on the University of Missouri campus in July 2010, and over the next 12 years, MICF has presented premieres of new compositions by a host of Resident and Guest Composers. 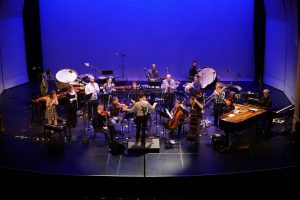 Alarm Will Sound in concert at the Missouri Theater

But there has been one constant at each MICF – Alarm Will Sound (AWS) has been the Ensemble-in-Residence for every Mizzou International Composers Festival — and AWS will again be part of the 2022 Festival this July 24-30. 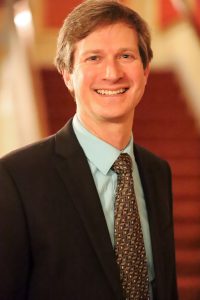 Dr. Stefan Freund, University of Missouri Professor of Composition and the Artistic Director of the Mizzou New Music Initiative, as well as the founding cellist of AWS, reflected on how the ensemble’s presence has enriched MICF over the years. “The highlight of the Festival has always been its final concert, which features AWS premiering eight pieces written by MICF Resident Composers,” states Freund. “Over the course of the Festival, Alarm Will Sound has made connections with Resident Composers and engaged with Guest Composers, including workshopping and premiering several of their works. Highlights of Guest Composer premieres during the Festival include Augusta Read Thomas’s Barlow-Commissioned Final Soliloquy of the Internal Paramour in 2013 and Donnacha Dennehy’s concert version of The Hunger in 2019, which was originally workshopped at the MICF in 2012.” 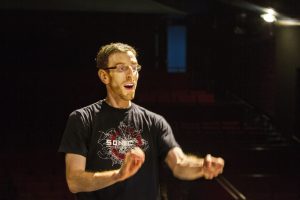 Gavin Chuck, Managing Director of Alarm Will Sound, highlighted the positives that AWS experiences through its ongoing relationship with MICF. “The Mizzou International Composers Festival is a high point of Alarm Will Sound’s year, because performing the music of living composers is our core mission,” adds Chuck. “It really is a composer’s festival where brand new work is front and center. The fact that the many premieres always cover such a wide stylistic spectrum is itself a celebration of the act of composing: never-before-heard music takes performers and audiences to newly imagined places thanks to the work of today’s composers.

“That’s why we love to work directly with MICF composers over two weeks, more intensely than we do in any other setting. And we’ve done this for thirteen years. Over that time, countless pieces we’ve premiered at the Festival have become part of our repertoire, heard by audiences across the country and around the world. Recording every piece by each Resident Composer has built an impressive audio library that streams to thousands through the internet. Getting to know so many composers at an early stage in their careers has led to deeper collaborations and long-lasting artistic relationships. We are proud to be a part of that history because it makes a future for music. So many years of premieres, recordings, and collaborations is massive so that, like mass, the festival has created a center of gravity in our field.”

The New York Times states: Alarm Will Sound is “one of the most vital and original ensembles on the American music scene.” A 20-member band committed to innovative performances and recordings of today’s music; Alarm Will Sound has established a reputation for performing demanding music with energetic virtuosity. With classical skill and unlimited curiosity, Alarm Will Sound takes on music from a wide variety of styles. Since its inception, AWS has been associated with composers at the forefront of contemporary music. The group itself includes many composer-performers, which allows for an unusual degree of insight into the creation and performance of new work.

Alarm Will Sound may be heard on fifteen recordings, including: For George Lewis | Autoschediasms, their most recent release featuring music of Tyshawn Sorey, and the premiere recording of Steve Reich’s Radio Rewrite. Acoustica, their genre-bending, critically acclaimed album, features live-performance arrangements of music by electronica guru Aphex Twin.

Alarm Will Sound will present two concerts at the 2022 MICF. The performances will include works by Guest Composers Meredith Monk and Angélica Negrón, composer Don Freund, and this year’s eight Resident Composers.

Igor Santos: through thoughts of a different kind (2018)