Black Pierrot, a 2021 album recorded by Mizzou’s University Singers that features the Mizzou New Music Ensemble, received accolades in a review in the January/February issue of the American Record Guide. Released on the Centaur Records label in June 2021, the album is highlighted by the world premiere recording of the title track, which was commissioned from composer William Averitt by R. Paul Crabb, director of choral activities at Mizzou, with funding from the Mizzou New Music Initiative. 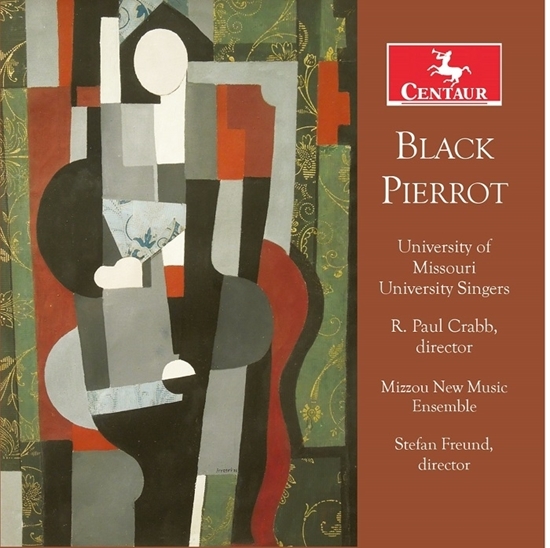 Averitt’s “Black Pierrot” is based on seven poems by Langston Hughes, each incorporated into a movement of the work. It was premiered by the University Singers and the Mizzou New Music Ensemble in a concert in March 2017 at First Baptist Church in Columbia. On the album, the work is performed by the Singers and the Mizzou New Music Ensemble, directed by Stefan Freund. NME members on the album include: Victoria Hargrove, clarinet; Daniel Keeler, cello; Kelariz Keshavarz, flute; Renan Leme, violin; Rebecca McDaniel, percussion; Gyumi Rha, piano; and Panagiotis Skyftas, saxophone.

Here is the American Record Guide review of Black Pierrot by Philip Greenfield:

Two things stand out. One is the high quality of the University of Missouri Singers: they are very, very good at what they do. Their Poulenc might be a little warm for the subject matter, but ‘Peccavi super numerum’ is gorgeous; the works by Clemens, Hailstork and Averitt really tell their stories; and  the Mizzou basses create a formidable Slavic rumble in Nikolai Golovanov’s ‘Otche Nash’. The ensemble also sports excellent soloists in soprano Mathena Claire Page and baritone Marques Jerrell Ruff.

The other standout is “Black Pierrot,” William Averitt’s settings of seven poems by Langston Hughes. Scored for SATB, soprano solo, flute, clarinet, violin, cello, piano and a colorful complement of percussion, it is an engaging work. Averett mixes music, poetry and social commentary while tipping his cap to Schoenberg’s Pierrot and evoking sounds and rhythms redolent of the Harlem Renaissance. He ends it with a heart-rending evoca­ion of ‘Motherless Child’ that stopped me cold. Like some of you, perhaps, I’m looking today at an America I thought I knew and am feeling a long, long way from home.

Founded in 1976, Centaur Records is one of the oldest and largest independent classical labels in the U.S. Black Pierrot is available as a physical CD in major markets throughout the world and from select online retailers. Digital downloads are available through iTunes and many other download sites, and streams are available through Spotify, YouTube, and other streaming services.