The University of Missouri School of Music celebrated the opening of its new building, the Sinquefield Music Center, with a ribbon-cutting ceremony and open house on Saturday, February 1.

The building (pictured) is named for lead donors Dr. Jeanne and Rex Sinquefield, who contributed $10 million toward the $24 million total cost of design and construction. Located in the heart of campus on University Avenue, the 47,000 square foot facility includes dedicated spaces for vocal and instrumental ensemble performances, 26 practice rooms, and a recording studio large enough to fit an 18-piece jazz big band.

Attendees at the ceremony heard remarks from Dr. Sinquefield; University of Missouri chancellor Alexander Cartwright; College of Arts and Sciences dean Pat Okker; and the School of Music’s director, Dr. Julia Gaines, who called the new facility “a game changer” for the department, the university, the city of Columbia, and the state. After the program concluded, visitors had the opportunity to tour the building.

You can read the MU News Bureau’s coverage of the ribbon cutting and open house here, and an interview with Julia Gaines about what the opening of the Sinquefield Music Center means for the School of Music here. In addition, the bureau produced a video about the building, which can be seen in the embed window below.

The building and Saturday’s event prompted three stories in the Columbia Missourian, about the Sinquefields’ ongoing support of music at Mizzou, the efforts to get the building ready to open, and the ribbon-cutting ceremony.

More media attention came from a feature in the Columbia Daily Tribune, as well as national coverage from a story by the Associated Press. 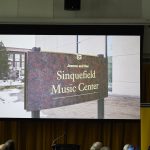 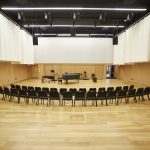 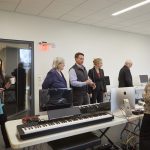 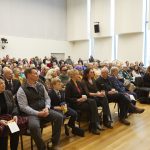 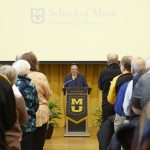 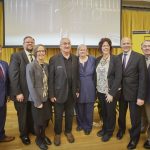 Exterior photo of the Sinquefield Music Center by Dale Lloyd. Other photos by Bob Jacquin.